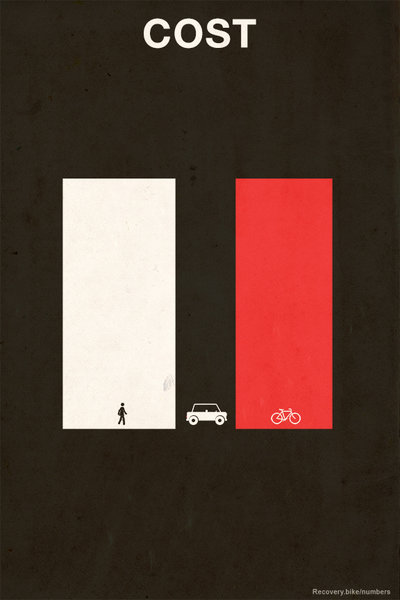 - At Recovery Bike Shop we estimate the average customer spends $200 per year to commute by bicycle.
- That's $500 every five years to buy a "new" bike every five years
- plus $100 per year in maintenance for a moderate commuter.
- That's $1000 per five years or $200 per year.
- That's $16.67 per month.
- The average bike commuter consumes more calories than the average car commuter. The cost of that increased food consumption is something like $1.87 per day. (source)
- This means the food costs of bike commuting are $56.10 per month.
- So, the costs of owning and operating a bike are something like $72.77 per month.
- Of course, your health care costs will likely go down.
- Given that the "fuel" required for walking is three times that of biking on a per mile basis, we might surmise that the average walk-commuter must spend $168.30 per month on additional calories.
(source)
- However, it is probably less than this since a person that walks instead of bikes or drives is likely to cover fewer miles per day. We've assumed that the average walk-commuter travels something like half of the distance of a bike commuter each day.
- This brings the cost of walking as transportation down to about $85 per month. Actually pretty comparable to bike-commuting. Of course this says nothing about the costs of kicks.

These are the numbers reflected in the poster above. What the cost numbers don't show is that the average American drives 876 miles in a month. The average bike commuter comes no where near this. And walkers travel even less. So it is also helpful to look at these numbers on a per mile basis.

- The average gasoline powered car costs about $0.83 per mile (including gas, purchase price, insurance, etc.).
- The 2014 census says that the average bike commute is 19.3 minutes. (source)
- The average rider travels 11 miles per hour. (source)
- So the average commute is about 3.5 miles.
- Twice a day is 7 miles.
- Assume 5 days a week and 251 work days per year and we get 148 miles per month.
- Add another 102 miles (educated guess) for errands and riding to see friends and family and probably the average bike commuter puts on something like 250 miles per month.
- That's about $0.30 per bike mile. Again, most of that is in additional food consumption.